Under Construction: The Stages of Spring and Summer Whitetail Antler Growth

The rapid growth of whitetail antlers during the spring and summer of every year is nothing short of amazing. In fact, antlers are one of the fastest growing forms of tissue known to man, increasing as much as a 1/2 inch of length per day in healthy free-ranging deer.

This amazingly quick growth captivates the minds of most outdoorsmen and women who watch as this phenomenon takes place on an annual basis. From the month of March, through early September, a buck can grow as much as 150+ inches of bone atop his head, all to cast these antlers during the winter, and begin the process once more.

In the early days of March, a buck’s testosterone levels slowly begin to rise. This is a process that naturally occurs due to a change in daytime length, also known as the photoperiod. Within weeks, small projections begin to emerge from a buck’s antler pedicles on its forehead.

At this point, a skin-like substance with a mossy texture, known as velvet, covers the emerging growth. This velvet contains an intricate weave of blood vessels and nerves that support the antlers’ growth. 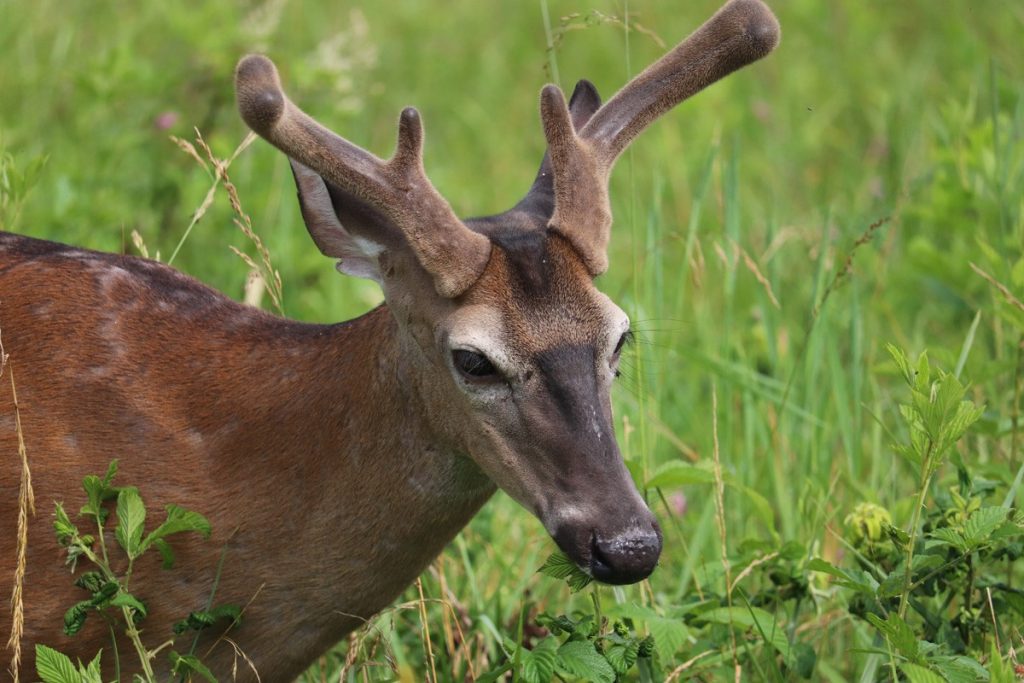 By the midway point of April, the projections from a buck’s antler pedicles have become outwardly noticeable, as they have begun to spring forward. However, growth at this point is still slow. Relatively short days, and minimal available food during the pre-spring green-up period are often cited as two of the most prominent reasons for this somewhat slow initial growth.

As spring begins to give way to summer, antler production kicks into high gear. By mid-May, most adequately nourished bucks carry antlers that now distinctively fork between their brow-tine and main beam segments. Some bucks will now also sport visible G-2 tines, and main beams that carry outward toward the tips of their ears, or sweep noticeably forward.

By mid-June, a buck’s antler characteristics and general features begin to become evident. Most main-frame points will have sprouted upward from a buck’s main beams. A buck’s main beams will already have grown to a length that is at least ⅔ that of what they will measure when growth concludes in the early fall.

During the month of July, much of a buck’s antler growth reaches completion. Main beams have achieved their maximum length, as have the tines which they give rise to. By late July, a buck’s antlers will actually look quite massive in relation to the months to follow, as soft blood-filled tissue is about to give way to hard mineralized bone.

By mid-August, antler growth has concluded in most parts of the country, and a buck’s rack begins to take on a more defined look. This comes as a result of reduced blood flow to the velvet that has encased a buck’s growing antlers. At this point, mineralization of the growth within takes place, forming rigid bone where soft mass once resided.

While some bucks begin to shed their velvet in late-August, the bulk of bucks in most regions shed during the first 2-3 weeks of September. The shedding process in its entirety seldom takes longer than 1-2 days to complete. During this period, bucks will feverishly rub their antlers on saplings in an attempt to rid them of any remaining velvet.

Several factors influence the antler growth process. However, the bulk of this growth has much to do with a buck’s overall physical well-being going into, and throughout, the growing season. A buck in poor physical shape will seldom, if ever, grow a rack that is of its full potential.

Many environmental factors play significantly into the antler growth process. Bucks that endure prolonged periods of extreme cold or harsh weather conditions are often subject to difficulty in recovering their pre-rut body weight and form. This especially takes a toll if such conditions carry over and delay the annual spring green-up. This can have adverse effects on antler growth, as much of a buck’s nutritional intake is required to maintain survival.

Prolonged periods of summer drought have also long been believed to have adverse side-effects on antler growth. As days turn into weeks without rainfall, nutritional content within typical browse species drops considerably. This, in turn, has the potential to cause nutritional deficiencies within deer of a given area. These deficiencies often slow overall antler production.

Injury of any type can also lead to abnormalities in antler growth. While some bodily injuries are known to slow a buck’s antler production, other cases have been observed wherein a buck’s rack exhibits abnormal or non-typical growth on the side opposite the bodily injury.

It is easy to see why antlers have captivated the mind of man for as far back as historical documentation exists. While it is true that you cannot eat antlers, it is also only natural to be mystified by one of nature’s most original artforms.